And now for something completely different. I’ve had the idea for a spaceship game that could be played cooperatively or solo about three years ago. I jotted down some notes and ordered a couple of ships from Ground Zero Games and Brigade Models. In my excitement, I even managed to paint up a couple. However, I didn’t like the GZG models very much as the casting was a bit bumpy and fuzzy. So I lost interest and stored the whole stuff away. 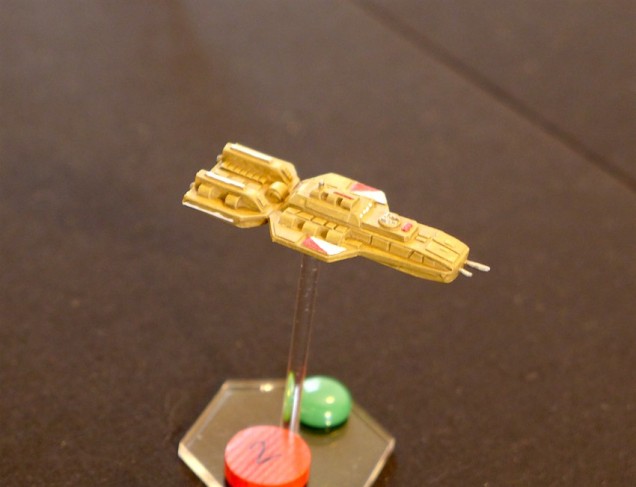 About once every six or so months, I got them out again, painted one or two ships and made some notes for rules. I never finished enough to get down to doing some real playtesting though.

Well, two weeks ago the spaceship bug bit me again and this time, I decided to pull through. I painted enough ships for a small squadron, printed out some markers and sorted through my notes. Then I had a first game.

Star Patrol is intended to be a simple game of spaceship combat which can be played solo or in teams against an enemy which is commanded by some simple rules mechanics. My initial inspiration to try something like this was the board game Pandemic, which impressed me very much when I first played it. Meanwhile, I have also played the excellent cooperative variant of X-Wing, which offered some more ideas.

The main idea is that there is a ‘threat level’ which rises each turn, making more enemy bogeys appear and making enemy ships react more aggressively. The games are scenario based, so you’ve got a mission you have to accomplish while the enemy tries to prevent that.

I’ve kept book-keeping to a minimum and this works fine. There are still three separate tables to consult for enemy reactions, but I guess less won’t be possible if I want to get a halfway decent variety of actions.

I’ve now played three games and had a lot of fun. I’m not completely happy; there are some issues with balance and I feel the whole game lacks a certain je ne sais quoi – something that makes it stand out and get you excited. I’ve been tinkering with a campaign system, but I still think the gameplay itself needs improvement.

Anyway, it’s always fun to tinker with game mechanics and perhaps something will result from this. If not, at least I’ve had some fun pushing spaceships around the table!