Introducing new people to gaming is something I really enjoy. Last Sunday, I had the chance to help organising an event at a Viennese art gallery called ADA. A friend and member of our roleplaying group, writer Barbi Markovic, had the idea to host a gaming salon there. Another of our roleplayers joined in and we decided to stage two games: One roleplaying game and a miniatures game.

The roleplaying game was organised and prepared by our pal Alex. He used Dungeonslayers, as this is a quick and accessible system. It’s easy to explain and learn and it’s available for free, so if someone wants to try this at home, they don’t have to shell out the money for rule books.

Although I enjoy RPGs, I wanted to make the case for miniature games and decided to run a game of X-Wing. X-Wing is a perfect gateway drug: It’s easy to learn, combines fast action with clever mechanics and most people can relate to the back story (although I met someone who hasn’t seen a Star Wars movie!).

I’m happy to say that the event was a success: We had a number of enthusiatic people who wanted to try out the games. As Alex had to leave earlier, I took over the RPG and K. ran the X-Wing table.

When we first had the idea, I was a bit uncertain if this format would work. I was afraid that people would only watch, too shy to get involved. I also feared that the whole gaming thing might be way too nerdy for the audience. However, when talking to people, I was surprised about how many had played RPGs or even Warhammer in their youth and were happy to give it another go. Others were new to the games but got into the mood quickly. Especially the X-Wing table was buzzing with excitment! 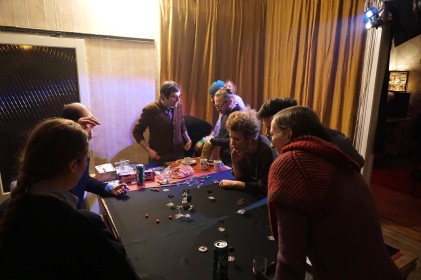 A huge thanks to the gallery people who were friendly and helpful from the start! A huge thanks also to the visitors, whose enthusiasm and willingness to get involved made the evening a pleasure. People kept asking if this was going to be a regular things, so let’s see – maybe this was just the start of a series of ongoing Gaming Salons.