In July 1861, the US Navy Department ordered 23 gunboats as an emergency measure to enforce the blockade of Confederate ports. Due to their rapid construction, those light-draft vessels were known as “90-day gunboats”. They proved to be good sailors and became workhorses of the navy, doing blockade duty as well as being deployed on the rivers. 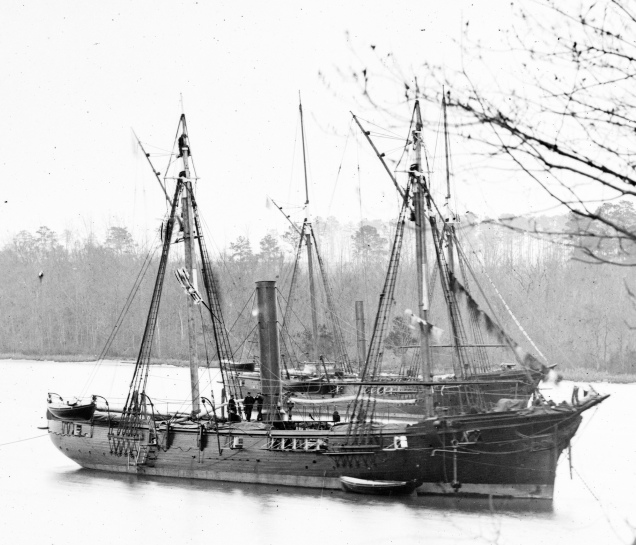 One of those vessels, USS Katahdin, was involved in the ‘Great Naval Cattle Drive’ which I want to play as a scenario with Sharp Practice. Another fine opportunity to build a ship from scratch!

The first decision was to reduce the size. Katahdin was 48 meters long, which would amount to 48cm in 1/100 (the nominal scale of 15mm figures). Not only is this a tad too large for my smallish table, all my other terrain is reduced in scale anyway – I don’t think any of my buildings are really 1/100. Also, my ground scale is reduced by one-third. So I decided to build the ship in 1/160, making the hull 30cm long and 5,5cm broad. This, in turn, would necessitate to reduce the size of the cannons, but I think this is an ok compromise – I certainly prefer it to having to distort the proportion of the whole vessel, as can be seen in some commercially available models.

There are not many detailed images of this class of ship available. My main source was a photography available from the Library of Congress. I also found some interesting pictures in Charles Stedman’s Sketchbook. Stedman was a surgeon who served on USS Huron (and later on the Monitor USS Nahant) and who made a series of humorous sketches of everyday life in the navy. 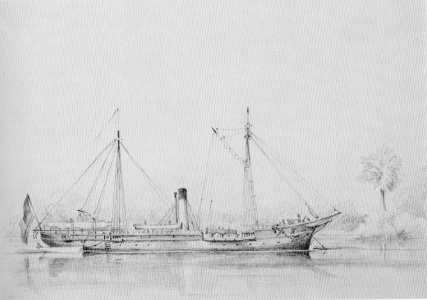 Those images were good enough to get the proportions and a general impression of the boat. As my model was going to be a gaming piece, I wasn’t too concerned about accuracy, I just wanted to achieve an overall effect of recognizability.

The hull was built as a laminated hull, made up of layers of balsa wood glued together. This was then sanded and the gaps were filled with Milliput. 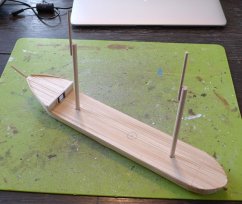 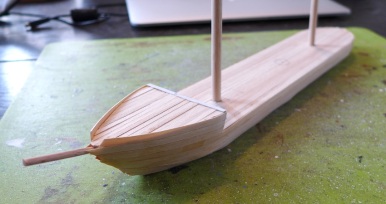 The small deck construction in the stern was made out of plastic. Some other details were added and then the whole ship was painted; black for the hull and a light brown for the deck and masts. I got the small guns from a modelling shop, but I built the big pivot gun from scratch, as the commercially available guns were too large. The guns look tiny in comparison to the crew, but that’s a compromise I can live with. The crew is from Peter Pig. I know that the rigging is complete fantasy, but it’s supposed to give an impression while, at the same time, not get in the way of placing the figures. 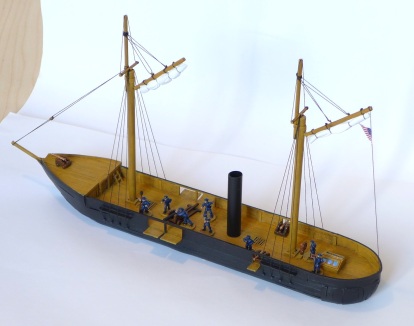 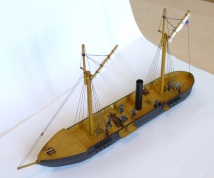 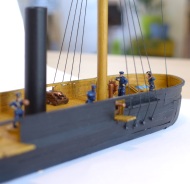 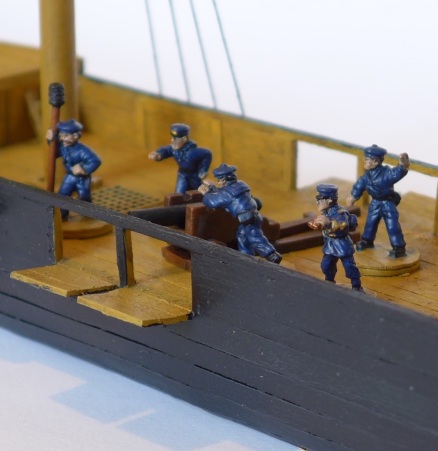 It was really fun building this ship and I’m looking forward to getting it onto the gaming table!