I’ve been pretty industrious painting-wise during the last weeks. After finishing the Confederate cavalry, I’ve decided that I also want a force of white Union troops. I got figures in marching pose for a change and have now finished three groups of those. I’ve got a couple more coming up, this time in shooting and loading poses so they can also be used as skirmishers. 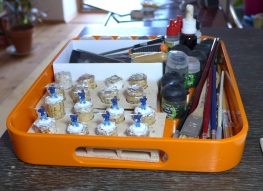 The last issue of Wargames, Soldiers & Strategy contains a fun looking mini campaign for Sharp Practice featuring the Louisiana Tigers, the most famous (and one of the few) Southern Zouave regiments. I wanted to paint Zouaves for a while and this seemed as good an excuse as any. Fortunately, the scenario specifies only one group of skirmishers as the Tiger Rifles, the company that wore the characteristic uniform with striped trousers. I was a bit apprehensive about doing the stripes, but I think they worked out ok.

And now for something completely different: rats! My recent game of Advanced Song of Blades and Heroes gave me the spontaneous idea to make a small fantasy warband. I like rats and I’ve always wanted to have Skaven, so I got a couple of figures very cheaply second-hand. Virago has promised me to give me some more.

This is actually my first attempt at 28mm Games Workshop figures. I’m not totally convinced, as they contain too many frills and furbelows for my taste. Still, second-hand GW figures are arguably the cheapest option of getting 28mm fantasy figures and they will work fine enough. I hope that I can wangle some plainer rats off Virago.

Finally, I’m making more sabot bases for the 15mm ACW figures. They are made of magnetic foil on thin sheets of brass – looks ok, is very handy for moving groups in formation and allows easy removal of casualties.