K. and I have been playing a lot of Sharp Practice recently, as we’ve been playtesting scenarios for the booklet I’m preparing. We suddenly felt like we needed a change and wanted to play something completely different. Remembering the whimsical and colourful figures of my 15mm science fiction collection, we got them out and set up a game.

We used our home-brewed rules Wandering Star and started with the pre-game phase. Dicing for forces, K. got the better end, having better quality troops and one additional group as a bunch of trigger-happy locals joined her forces. The scenario we played was number 9, Follow the Clue.

The small colony town is still peaceful… The two objectives are situated in the middle of the table, one to the right of the creek opposite of the communications building, the other to the left of the creek between the bunker and the hill.

K. deployed a lot of her troops on her left flank: The fierce Brunt, a group of Pasiphaeans, her special operatives and the eager locals. On her right flank, her Sharkmen advanced threateningly. 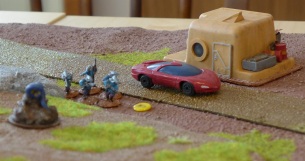 I had one group of Quar and a bike on my right flank, while the rest deployed to the other side of the creek. I decided that I would go for the objective to my left and advanced cautiously while K.’s Brunt rushed forward. Having put my teams on overwatch, it was not too hard to discourage the Pasiphaeans to keep their hands off the crates. They fell back severely mauled, but meanwhile, K. had brought her second wave forward. Also, the groups from her left flank had positioned themselves to shoot at my guys covering the objective, causing some casualties among my Auxies. I was now on the defensive while K. brought her Brunt forward to capture the objective.

Across the creek on my right flank, the Quar on the speeder bike had first added to the covering fire targeting the objective. When K. advanced her other troops, it fell back. As I saw that I was stuck on the left flank, I decided to try to speedily grab the other objective in a surprise move. The bike and a lone group of Quar rushed forward. However, the bike suddenly came under fire from K.’s special ops. 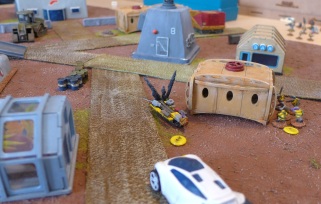 When her pesky locals joined the fray, the rickety vehicle blew up. 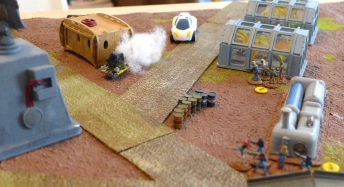 With the bike, my hopes of achieving the right-hand objective went up in smoke.

On the other riverside, the Brunt needed a couple of rounds to figure out how to open the crate – they had to perform and intelligence check, which is not their strength – but there was not much I could do to stop them.

The game ended with a victory for K.! 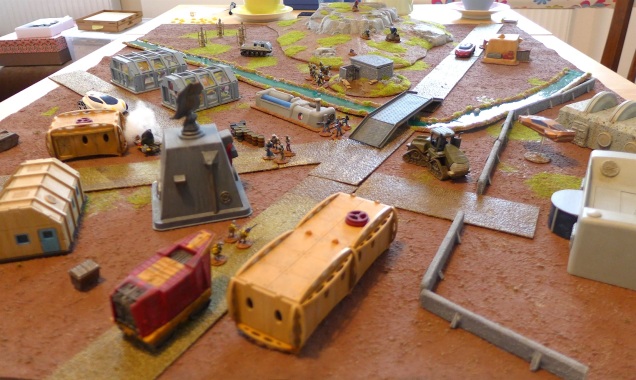 It’s been a while since we’ve played Wandering Star. There are some things that bug me about the rules, but K. thinks that’s just because I wrote them myself. She’s happy to play them and they give a fast and fun game, so I guess I’ll stick to them.

The game also motivated me to rummage through my lead pile looking for more 15mm sci-fi figures. I realised that I’ve got enough to create a whole new force! I’ve already prepared a couple for painting…