One of the scenarios in the Sellswords & Spellslingers book demands a wizard’s tower. While there are several available to buy (from the plain Ziterdes keep to the formidable Tabletop World spire), I decided to scratch build my own.

The starting point was a box of pringles. I glued it unto another cardboard roll to, as I wanted to have it protrude from a rocky outcrop. The basis was provided by an old single record.

For the rocky outcrop, I used blue foam and chunks of tree bark. The basis for a small secondary tower was formed by an empty toilet roll.

The next step was to fill the holes and cracks with modelling clay (of the air-drying kind) and filler. I also made adoor for the small tower was made out of wood and a parapet for the top platform.

I then added some details. First, cardboard brickwork to break up the surface of the tower. Second, an oriel made from yet another cardboard roll. Third, the door and windows. I bought those from Thomarillion, as I didn’t trust myself to scratch build nice enough ones. And last, I made protrusions beneath the parapet. They will later carry the Gargoyles, which I also ordered from Thomarillion.

I then started to cover the whole structure with DAS air-drying modelling clay, an idea I got from Tony Harwood, who regularly uses this technique with great success.

Before applying the modelling clay, I covered the surface with PVA glue, as the clay shrinks and may otherwise come off when dry. Looking good so far! 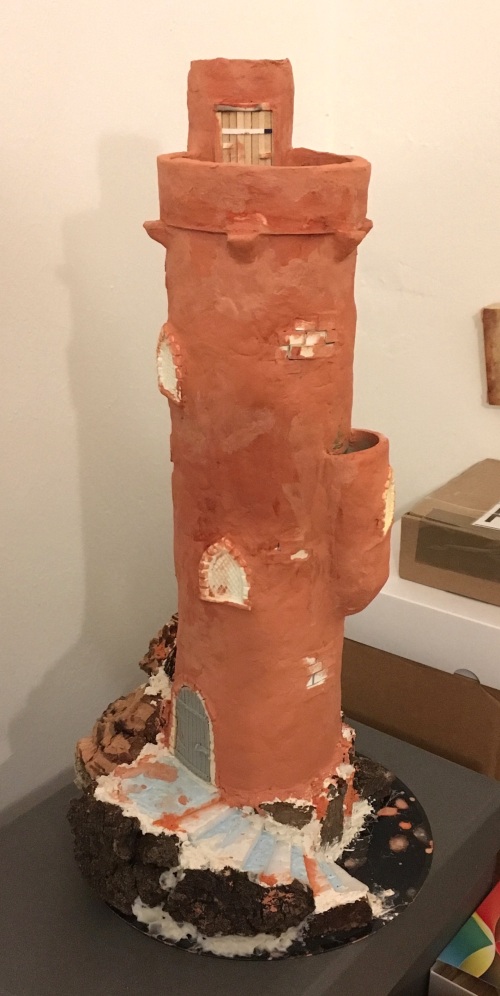 The roofs were made out of cardboard cones, with small bits of cardboard for the tiles. This is a boring and mind-numbing work, but fortunately I’m used to it from other project and those roofs were actually rather small in comparison to some others I’ve made. The base was covered with sand and grit and PVA glue.

Now there was only the painting to be done… and, after a couple of days, I had my final result – the wizard’s tower!

10 thoughts on “Building a Wizard’s Tower”