On July 4, 1863, the Union cavalry was in hot pursuit of the Confederate army retreating from Gettysburg. Judson Kilpatrick’s division had information about a rebel wagon train making its way through the South Mountains and set out to capture the wagons. Due to a rainstorm, the Union troopers arrived at the approaches to Monterey Pass in the evening. When they slowly made their way up the pass road, a lone Confederate cannon opened fire.

Thus started the Battle of Monterey Pass, one of the most dramatic small cavalry actions of the Gettysburg campaign. The unusual circumstances – a fight at night, in very difficult terrain, while a torrential rainstorm was raging – made this “a night never to be forgotten”, as one participant in the action later wrote.

For Sharp Practice, I have decided to divide the action into three parts. This was a playtest for the first part, the approach to the pass road and the Confederate ambush. The results of the game will have an effect on the next scenario.

The Union had four groups of well-trained cavalry, armed with breechloaders as well as sabres and revolvers. The Confederates had three groups of cavalry and a single light gun. They also had three deployment points, two of which were hidden (marked in a map), and the ‘tactical’ characteristic, which allowed them to make ambuscades with two command cards.

The Union command approaches to road. A narrow road, heavy woods to both sides and reduced visibility due to it being night, as well as the driving rainstorm make this a dangerous looking place.

Nevertheless, K., who plays the Union commander, pushes on and deploys her cavalry in column on the road.

Suddenly, a cannon opens fire! However, due to the difficult circumstances, the firing is less than spectacular (distances were halved to account for the weather and I was unlucky with the dice…). Although slightly shocked, the cavalry immediately charges the gun. 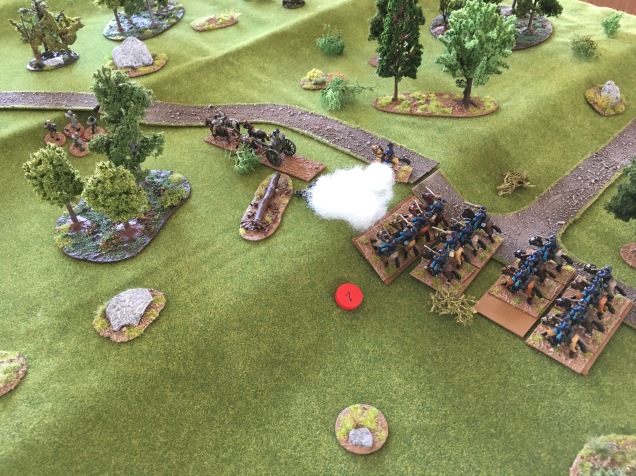 The gun crew breaks and runs into the woods. Now this was quick! Buoyed by their success, the troopers push on. 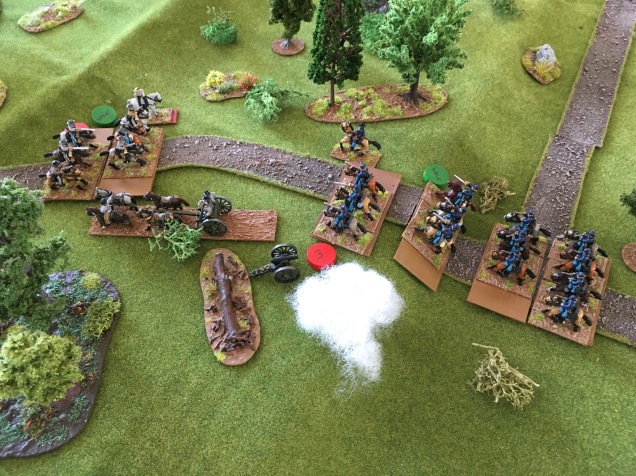 A lone group of Confederate cavalrymen decides to mount a desperate charge to hold the Union column. However, after a short struggle, they are pushed back. The Union immediately countercharges and in the resulting melee, a sabre hits the Confederate leaders, who drops from his horse and lies dead on the ground. Things do not look good at all for the Confederates.

One of the Union groups dismounts and heads into the woods to catch the gun crew, which is milling about. The rest pushes forward.

Suddenly, a salvo erupts from the woods – finally, a group of dismounted Confederate troopers had managed to lay an ambush. The Union troopers in front are dazed, but one group from behind charges forward at a canter and crashes into the rebels. Now it’s their turn to be surprised, and completely overwhelmed by the relentless horsemen, they throw away their arms and surrender (we have a house rule that, if one side in melee has four times as much dice as the other, the side with less dice immediately surrenders).

With the Force Morale down at 1, I concede defeat. K. has lost a couple of men, but not one single point of Force Morale! An overwhelming Union victory, which will make if hard for the Confederates to save their precious wagon train…

This was a fast and furious game. I have to admit that K.’s aggressive attack caught me on the wrong foot – I had thought she would dismount and methodically work her way through the woods, giving me the chance to perform an ambuscade or two and get my gun out in good order. Let’s see how the story unfolds – the Confederates have a second line of defense at the pass’ summit near the Monterey hotel.