A year ago, I ran a freeform map Kriegsspiel (inspired by Paddy Griffith and Verdy Du Vernois) for my mates Sigur and Virago. The game went on for several months and was fun, although it had some problems – one of them being that it petered out without a real conclusion.

Now the fascinating and for me central thing about Kriegsspiel is that it is double blind, the umpire being the only person who has complete knowledge of the positions and actions of both sides. It’s fascinating as well as entertaining to see players act with a limited knowledge of what is actually happening, something that is hard to model in conventional in tabletop wargames.

So I wanted to try Kriegsspiel again, but in a more streamlined form. Mark Backhouse did some very interesting Twitter Kriegsspiels, so I decided to try this route – a game that would only take an evening, with orders being received and transmitted via Facebook Messenger. I wanted to have structured rules for a change, so I wrote a quick and simple game that fits on two pages.

The setting was a fictitious American Civil War battle, set during the Shenandoah Valley campaign in 1862. Sigur played Stonewall Jackson and had to drive the Union troops, commanded by Virago, out of the town of Turvington. I drew a map on an A3-sized sheet of paper and used the Kriegsspiel blocks I got from Command Post Games. The map as well as the rules and the mission briefings were sent to the players. Both printed the map and made their own counters to help them visualize what was happening.

This is what it looked for Virago and Sigur:

And this is what it looked for me: 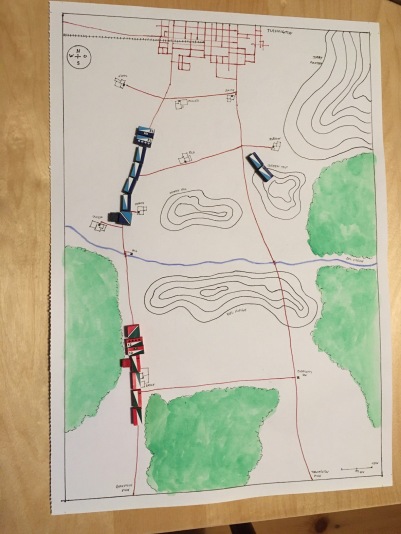 The game was great fun, at least for me. Here is a short video documenting the movements of the units on the map: https://spark.adobe.com/video/EjkkhcyXOdaTJ

We had some really great moments: Right at the beginning, Virago redirected a couple of his units to the east, but seems to have lost orientation, as he was pretty surprised when he got the reports of where he and his units where. Well, a little friction while maneuvering several brigades along country roads is actually pretty realistic! Later, one of his brigades, while still in column, stumbled into the flank of a Confederate brigade. While the Union troops formed line of battle, Sigur swiftly pulled his men back and saved himself from what could have been a very bad situation.

In the end, Sigur managed to achieve a substantial local superiority and hammered the Union troops into submission. 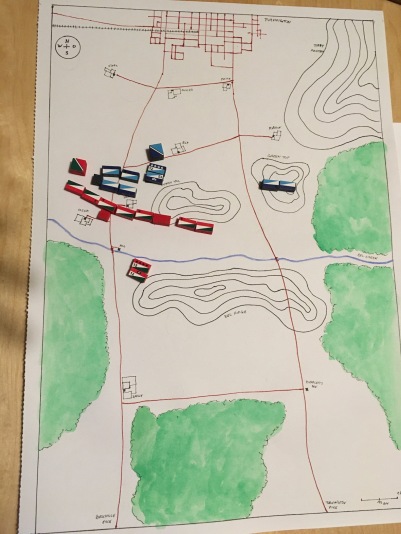 I’ve already asked two other friends if the want to try out this game, as I’d be interested in how different players approach it. I’m also motivated to make more experiments along that line. I’ve also learned a couple of things: First, it took longer than I thought it would. Perhaps I will make the combat mechanics a bit more decisive. Also, despite having structured rules, there were more situations than I thought in which I had to make a quick decision as an umpire. I don’t want to make the rules more water-tight, as I think that it is paramount that the game moves along at a brisk pace, so I will got with it and embrace this (without being arbitrary). And the last thing I noticed is that, in the heat of battle, it is easy to lose track of things, such as the turn sequence, all the players’ orders etc. And this is only with two players! As much as I’d love to try a game with more players, I’m not sure how I would manage it.

3 thoughts on “Experimenting with Kriegsspiel”