So it was with mixed feelings that I went to Virago’s to play Blood Bowl. This is one of Virago’s all-time favorite games, so naturally, he wanted to share his enthusiasm.

Now back in the day, my brother owned the second edition of this game and I guess we must have played it. I vaguely remember painting some Orcs, but I have no memories of how the game works.

Sigur had brought his own team, Orcland Raiders, while Virago let me chose between the different teams he had. I took Wood Elves, mainly because I liked their look, but I realised soon that they are a very strong team. 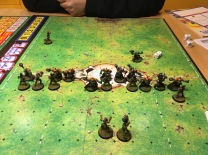 So it was Sigur’s Orcs against my Wood Elves in a game that saw the elves in their best form. Before you get wrong ideas, I had the great advantage of having Virago as my coach, who couldn’t hold back and gave me a lot of tactical advice. The elves played fast and nimble, while the Orcs relied on brutal strength, and at first it looked like they might massacre my whole team – I made the first two touchdowns, but each cost me about three figures injured or dead. However, I could hold my advantage and win the game!

Now, as I said, sports games are not my cup of tea. I can see, however, how this is a good game if you like the theme. It is very thematic and it seems perfect for tournament play – after all, tournaments and organised competition are what sports are all about, so it really makes sense in that context.

One thing we realised was that this is not a fast play game. Although it looks like it would be quick, it took us more than three hours to play it. This, of course, is something that was pretty standard at the time, when games usually took 3-4 hours to finish. By today’s standard, this is already considered long – many modern games claim a playing time of 1-1,5 hours (which is not always true, of course).

Why did this change? I often hear that people have less time today, but is this correct? Did people really have more time back in the 80s and 90s? Or was it just us that had more time, as we still went to school or university? I think that at least one reason why contemporary games are less time consuming may be that the target demographic is different: Back in the 80s and 90s, the target audience was kids and students, while today, it is (or significantly includes) 30- or 40-somethings, and those are the people who have little time (and probably didn’t have much more time back then). Or maybe I’m wrong – what do you think?

Appropriate for my current fantasy mood, Virago invited Sigur, Daniel and me over to play a game of Warhammer Quest, the GW classic from 1995.

Daniel took an elf wizard, Virago an elf ranger, Sigur a Bavarian Barbarian and I a Dwarf from Uberwald. Our objective was to secure a magical ring from a statue and throw it into a fiery chasm right next to the statue – no wonder the evil masterminds who design those dungeons never get insurance coverage…

When the group started out, they were in a very good mood, with much slapping of shoulders and chanting of “hey ho let’s go”. For those who wanted to see, though, there were some sinister portents right away – one of them being the Barbarian dying in the second room because we met a Minotaur. However, blissfully unaware of our fate, we cheated our way through this slight setback (nothing happened, carry on) and continued along the way. “Easiest dungeon ever”, the dwarf was heard to murmur.

When we hit a junction, the dwarf wanted to go right and the Barbarian left, so of course we followed the Barbarian. What could possibly go wrong?

On we went, deeper into the dungeon, killing some Goblins along the way. Maybe they guarded something? Perhaps the magical ring? Or could it even be, the Dwarf pondered, gold?

When we examined the next room, however, it turned out to be some stinking chamber with a hole in the middle and no sight of a statue, a ring or a chasm. We took the wrong turn! The Barbarian turned back immediately, but the Dwarf wanted to look inside – there might be some gold hidden somewhere after all. He and the wizard charged in, only to find themselves surrounded by monsters. Lots of them.

We fought like real heroes, i.e. for our lives. The Barbarian deigned to join us after a while and together, we managed to slay our ghastly foes. Unfortunately, there was no huge pile of gold. “No hard feelings,” the Dwarf laughed, “let’s go back and take the other turn!”

After retracing our steps (and getting healed by the wizard along the way), we finally arrived at our aim: A room full of Goblins and Snotlings, with a fiery chasm right in the middle.

The Dwarf charged right ahead and got stuck in the ropes of the rickety bridge. Unable (and later unwilling) to retreat, he slaughtered hordes of Snotlings. When he finally managed to cross the bridge, he immediately lunged towards the statue – the dwarf was the only one who could get the ring. The Barbarian followed suit to engaged some goblins and cover his squat buddy, but he slipped and – fell into the chasm! Overcome by blind rage, the Dwarf turned around to revenge his Bavarian comrade, only to slip and – fall into the chasm.

Unable to complete the mission, the wizard and the elf looked at each other. “Sod this for a game of soldiers,” one of them murmured, and together, they left the dungeon and rode into the sunset.

Now this was a fun game and a great evening with friends! Everyone was in the right spirit and embraced the narrative, which reached its fiery climax when two heroes plunged to a rather embarrassing and unheroic death.

Warhammer Quest is an interesting game that was ahead of its time in some aspects – for example, in being fully cooperative without needing a game master. It has some lengths, especially if you have to  retrace your steps, but this can easily be sped up by the players. Combat can be very brutal and doesn’t seem to be very balanced. But it’s fun and the randomly generated dungeon, the variety of missions and the large number of different enemies and monsters provide it with a high replay value.