We still haven’t had an opportunity for a game, but at least I’m back to painting. However, I did find a report of a game of Flashing Steel we played a couple of months ago which I haven’t published yet, so here is the exciting story of the Prisoner Escort!

The game started with the British, played by me, wanting to escort a prisoner to the waiting boat. The pirates, played by K., assembled to spring their mate.

K. decided to stage a massed attack from one side, while I wanted to keep my guys together. However, I made the first of a series of bad decisions: I attached to prisoner to my weakest character, the weedy Cpt. Percy Pilbeam.

Due to bad luck and my trademark indecisiveness, I gave K. time to position her crew to both sides of the harbour entrance. When I finally made up a plan and acted, my guys were positioned all wrong: My strongest character, Special Agent Emma Peel, was on the far right flank, while I decided to jump over the left wall with the guy escorting the prisoner. The rest of my men broke through the centre and tried to pin the pirates by moving into close combat.

Fortunately, Emma has some special skills and managed to sprint over to where the action happened. Soon, a series of melees was developing, with the prisoner precariously close to the table edge – K.’s objective was to get him out. 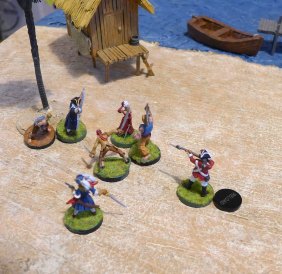 While my leader Admiral Horace Parsloe-Parsloe dawdled and entered the fray rather late, Emma did the job of several men and kept the pirates busy.

Alas, it was not enough, and in the end K. managed to grab the prisoner and lead him over the table edge.

Another fun game, but I made even more mistakes than usual. It’s no news that I tend to change my plans mid-way, leaving me with forces positioned all wrong, but this was an exceptionally substandard performance. Still, Emma’s heroic actions almost managed to change the course of the game, which stayed exciting until the end.