When this game was mentioned on the Meeples & Miniatures podcast, I immediately pricked up my ears. I’ve been interested in the Wars of the Roses for a long time and I like innovative games that can be played in a short time. The Cousins’ War, published by Surprise Stare Games, promises just that at a rather low price.

The game comes in a sturdy and small cardboard box. In fact, the box easily fits into my bag, making this a perfect game for travel and holidays. Nevertheless, the production value is high: The board is made of very sturdy cardboard and the gaming pieces are made of wood. You also get a deck of cards and three dice.

The game has a built-in turn limit: It will end after turn 5. The objective is to control all areas of England, or, when the turn limit is reached, to control more areas than your opponent. This is done by placing wooden cubes, which can be moved by playing action cards. Each turn, there is also a battle, the winner being allowed to place his surviving cubes onto the board.

Battles are resolved by a clever bluffing mechanics which introduces suspicion and second-guessing – very thematic for a war in which commanders did occasionally change sides right on the battlefield. 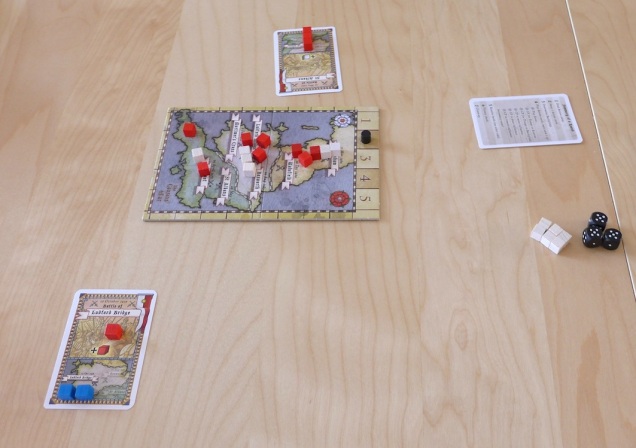 Action cards can be played for the specific action that is stated on them or for their Command Points, which enables the player to do different things, such as move his or her cubes to the battlefield or to a region of the board, or even to try to remove the opponents cubes.

Action cards also have secondary actions which may benefit your opponent, so it is important to watch which card to play at which moment. A surprisingly large number of actions and combinations of actions are possible. This enables strategic planning, but also introduces an element of uncertainty and even chaos, because the other player will do something completely unexpected. Again, all this makes the game very thematic – the Wars of the Roses were full of surprising turns and double-crossing. 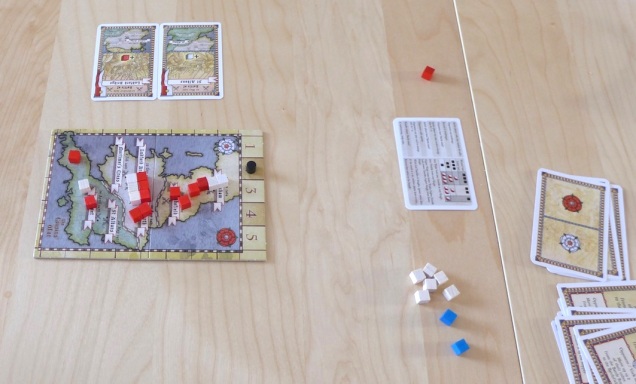 Normally, K. doesn’t like bluffing, but in this game, it is only a small part and it feels right. We are both not used to it, though, so lots of grinning and giggling ensued. We both enjoyed our first game very much. The nasty Lancasterians won after turn 2, but I’m looking forward to a rematch.

Highly recommended if you fancy a quick and portable game that nevertheless has a strong theme and feels like you are playing out an epic conflict.

As you probably know, until now we’ve been gaming on the dining table. This meant that I couldn’t set up and prepare a scenario in advance and things had to be put away immediately after the game was finished. Apart from prolongating our precious gaming time, it also made it impossible to interrupt a game and finish it the next day.

Now K. has finally allowed me to get a second table for the living room to use as a gaming table. As it had to be a smallish one, so it wouldn’t take up too much space, I went for an extendable IKEA model named BJURSTA. Measuring 90cmx90cm, it can be extended to 168cm length, which will be enough for our demands.

Assemblage was, as always, a bit of a hassle – this time, I managed to screw on the legs on the inside instead of the outside! I’m much better a building 15mm scenery, I have to say, but at least I provided some entertainment for K.

In the end, everything turned out fine and now I’m the happy owner of a gaming table!

To celebrate, I set up a small game of DBA with my El Cid figures. K. was busy, so I tried to play solo, which – apart from having a dunderhead as an opponent – worked ok. It gave me an opportunity to learn the rules a bit better, although I’m not sure I did everything correctly. The game was surprisingly interesting and also felt historically correct. The flank attack by the Almoravid light horse was easily driven off by the crossbows (I was a bit surprised how easily), but the Almoravid spears held their ground against the Spanish knights and managed to drive them back step by step. However, as the Almoravid flank had broken, the Spanish only needed to destroy one more unit, which they managed – a clear Spanish victory with one one unit lost.

DBA really is more fun than it looks. Next time, I might be able to convince someone else to game with me. However, the first proper game scheduled on the new table is another scenario of Sharp Practice!

The year before last, I bought a medieval fortress set from Kallistra at CRISIS. This is a substantial set, with a couple of walls, towers, a keep and a gate. I’ve been collecting siege scenarios for the Wars of the Roses as well as for El Cid and was looking forward to having games. However, I abysmally failed when it came to painting, and this was not for trying. After two attempts, I angrily packed the whole thing and stored it in the cupboard.

So when I discovered that my new gaming chum Sigur is a professional painter and proprietor of Battle Brush Studios, I decided to hand the whole hotchpotch over into his capable hands. As was expected, Sigur revealed himself to be a real wizard of the brush: reliable, fast and extremely talented! I’m very happy with how the fortress turned out.

Assembling all my already painted siege stuff, including my scratch built mine, I staged a mock siege just for the fun of it. Here are some pictures of the whole set up: 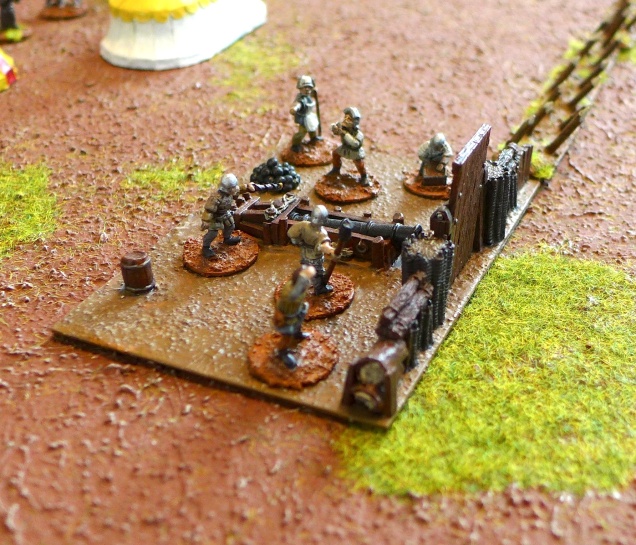 I’m really looking forward to having a game with the fortress. I can also highly recommend Battle Brush Studios if you need a reliable painting service that delivers stunning results.

We’ve settled well into the new city and apartment, although the heat is unbearable at the moment. Fortunately, I met fellow wargamers Sigur Skwarl and Virago, who took my mind off the weather by preparing a game set in good cold England.

This was my first game of Dux Britanniarum, but as a longtime Lardies fan, I recognized many of the mechanisms. Also, my hosts occasionally gave me hints when I was about to make a mistake – they don’t know yet that this had nothing to do with me being a beginner and all with me being a tactical dunderhead!

I took the stalwart Romano-British, which had to defend their village from a raid by greedy Saxons played by Sigur. The first couple of turns, Sigur rushed his men towards the village centre while the Saxons advanced at a more leisurely pace.

The only exception was a young British Big Man, who spurred his warriors on and advanced in front of the British line. When the Saxon saw this, they immediately charged, massacring their poor enemies. Fortunately, my force morale didn’t suffer – seems no one liked the overambitious guy.

The Saxons started searching the houses for loot but didn’t find anything for several turns. I used the time to organise my levy into one big mass of unwashed terror and ushered them towards the Saxons.

They proved more resilient than any of us thought! In the end, however, they succumbed to the superior fighting skills of the Saxon elite.

With those guys gone, there was no real resistance left and the Saxons managed to carry off a couple of pigs. Salad only for the poor British this week!

This was a great game and a fun evening. Rules-wise, I really liked Dux Britanniarum. It was interesting to see how mechanisms already present in Sharp Practice have been refined and streamlined. Especially Force Morale is a concept that I would like to see in SP – maybe I’ll make a house rule to include it. The card system is very clever and the campaign looks impressive. All in all, it looks a bit as if Sharp Practice were a rough gem while Dux Britanniarum was a polished diamond. Don’t get me wrong: I still love Sharp Practice as it’s incredible versatile and lends itself to all kinds of tinkering, which is something I like to do. However, I’m really tempted to get a copy of Dux Brit and dust off my SAGA figures for some Dark Ages rumble.

But most importantly, my hosts were gracious and fun and it was a pleasure to game with them. Thanks Sigur and Virago, I hope we’ll have more games in the future! And thanks for letting me use your photos.