Last Saturday, we hosted another gaming salon at the ADA gallery in Vienna. Under the headline ‘Hunting Humans’, the evening was dedicated to monsters. We had two games for the visitors to play. The first was a pen-and-paper RPG ran by Alex. He used D&D and had prepared a couple of characters to choose from. The twist was that this time, the players were the bad guys: As a small band of Orcs, they had to help their tribe to raid a human settlement.

I had set up Zombicide, the cooperative Zombie game we have played a couple of times lately.

Unfortunately, we made a scheduling mistake, as we completely missed  that there were two other events on that day which drew off potential visitors. We only had a handful of attendants, but at least we got in a couple of games ourselves. And those people who came were quite enthusiastic to play. Zombicide was a smash. We played three missions, each one with different players, but only succeeded in winning one of them. 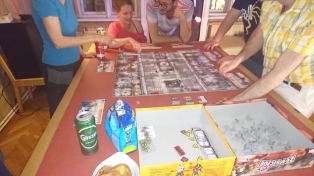 The RPG also sounded like a lot of fun. K. joined in and told me she had enjoyed herself playing a tough female Orc, the leader of the raiding party consisting of another Orc, a goblin and an Ogre called Einstein (armed with a stone in a sack).

Even though it was quieter than last time, it was a fun and inspiring evening. Hopefully, we’ll have another one soon!